Published studies show that the safest way to remove a tick is to:

The life of ticks

Ticks are arachnids (related to spiders) and have eight legs. Tick larvae are very small, around 1mm in size and can be hard to see. Nymphs are slightly larger at around 2mm diameter, and adult ticks (before a blood feed), are around 4mm in size.

Adult ticks attach to the tips of grass blades and vegetation, and from there transfer themselves to a host which is usually a passing animal or human.  The tick attaches to their host by biting the skin.

Ticks generally lodge in the skin of the head, scalp or neck of their host. The most common reaction is local irritation, itching and swelling at the site of a tick bite, which is usually not due to allergy.

Ticks are present mainly on the east coast of Australia, however, there are also populations of ticks in several non-coastal areas.

The tick season is often considered to range from July to December, when adult ticks are more prevalent, but the risk of exposure to ticks exists throughout the year. 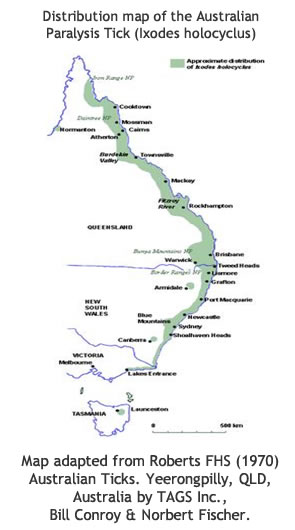 Mild allergic reactions to ticks appear as large local swelling and inflammation at the site of a tick bite, that can last for several days.

Severe allergic reactions (anaphylaxis) to the Australian paralysis tick, Ixodes holocyclus have been reported. Anaphylaxis occurs when the tick is disturbed, as this causes the tick to inject more allergen-containing saliva.

It is important to avoid disturbing the tick by scratching something that can’t be seen, trying to remove the tick, or applying chemicals such as methylated spirits or kerosene to the tick.

It is unsafe to insert fine tweezers between the skin and the tick mouthpiece and lever the tick out. This does not prevent tick allergy or anaphylaxis, and therefore ASCIA advises against this method.

If a person is allergic to ticks, they should carry an adrenaline (epinephrine) autoinjector (such as EpiPen) and a mobile telephone. Symptoms of a severe allergic reaction (anaphylaxis) include any acute onset illness with skin reactions such as swellings, and difficulty breathing.

It is important to note that:

Confirming a diagnosis of tick allergy

At this time, there is no reliable skin test or blood test for allergen specific Immunoglobulin E (IgE) antibodies to confirm a diagnosis of tick allergy. Australian researchers have identified that the allergens that cause problems are proteins in tick saliva. Diagnosis is currently based on the history of the reaction.

Researchers have identified that the following blood allergy tests are positive in the majority of people with serious allergic reactions to tick bites. The following blood tests for allergen specific IgE may assist in confirming a diagnosis:

Australian allergic diseases physicians were the first to describe a link between tick bites and the development of mammalian meat allergy. These findings have since been confirmed by researchers in the USA and in Europe.

Some people will also be allergic to mammalian milks and animal-derived gelatin which is present in many food products, as a binding agent in some medications and in intravenous blood substitutes known as gelatin colloid (such as Haemaccel and Gelofusine). The target allergen associated with these allergic reactions is present in the gut of ticks, and all mammalian meats (such as beef, pork, lamb, kangaroo, and venison).

People with allergic reactions to mammalian meats are advised to avoid all mammalian meats (beef, lamb/mutton, pork, goat, horse, kangaroo, venison and other exotic mammals). Artificial blood (made from beef) and all forms of gelatin should also be avoided.

People with mammalian meat allergy should wear a medical bracelet warning of allergy to intravenous gelatin colloid. This is an intravenous preparation used as a blood substitute in emergency situations.

Measures to reduce the risk of tick bites

The following measures may reduce the risk of tick bites:

Allergen immunotherapy (AIT) which is also known as desensitization, is currently not available to switch off tick bite allergy.