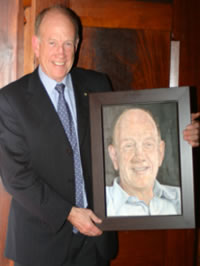 The ASCIA Annual Basten Oration was initiated in 2006 by the ASCIA 2006 chair and ASCIA President (2005-2006) Dr Karl Baumgart, who also presented Professor Antony Basten AO with his portrait (painted by Dr Gillian Dunlop) at the ASCIA 2006 Gala Dinner.

The Basten Oration has been held at each ASCIA Annual Conference since then, in recognition of Professor Basten's pioneering work in immunology for more than 40 years, which continues today. There was no Basten Oration in 2020 due to the ASCIA 2020 Conference being postponed.

As well as Professor Basten's immense contribution to the discipline of Clinical Immunology and Allergy, he was also the founding President of ASCIA and Chairman of the highly successful XVII International Congress of Allergology and Clinical Immunology (now known as the World Allergy Congress) held in Sydney in the year 2000.

A Journey from Benchside to Bedside, and Population to Politics - Why would you do it?

Food Allergy and Anaphylaxis in Australia – A Narrative Review

The Changing Faces of Clinical Immunology and Allergy

Allergy and the NCD Pandemic - The Canary in the Coal Mine

A Global Perspective on Allergy - Are there Targets for Prevention?

Nature and Nurture - The Pathogenesis of Systemic Vasculitis

Monoclonal Antibodies and Flow Cytometry - Techniques made for each other, and for Clinical Immunology

Heterogeneity in Response Phenotypes in Atopy - Insight from Studies